From Farm to Fork: Building a Sustainable Local Food Economy in North Carolina 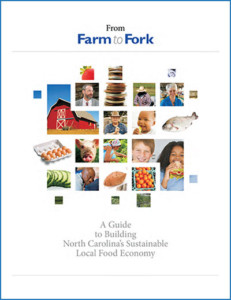 In 2008 and 2009, CEFS convened hundreds of food system stakeholders across the state in regional meetings, which concluded with a statewide summit, to develop “game changer” strategies to transform North Carolina’s food system.  These strategies, and other outcomes of the process, are detailed in From Farm to Fork: Building a Sustainable Local Food Economy in North Carolina, a 100-plus page comprehensive guide to statewide action.

CEFS and its partners – including healthcare professionals, local government officials, nutritionists, anti-hunger groups, faith-based organizations, economic developers, funders, entrepreneurs, youth-based organizations, retailers, consumers, and other academic institutions – have now accomplished many of these “game changers”, and others are underway.  This includes the establishment of the legislated Sustainable Local Foods Advisory Council, the development of the NC 10% Campaign, and many other programs and projects.

Working together, we are addressing significant issues in the state through local agriculture, including economic development and job creation, combating childhood obesity, preserving farms and farmland, and enhancing food security.

In May 2009, the Center for Environmental Farming Systems hosted a summit that brought together approximately 400 stakeholders from across the state for the purpose of developing a Statewide Action Plan. N.C. Governor Beverly Perdue, U.S. Representative Bob Etheridge and former U.S. Representative Eva Clayton were among the dignitaries in attendance, and each pledged their support.

The preceding fall, CEFS held six regional summits to get a clear understanding of the issues and opportunities in the different parts of the state.

A wealth of ideas grew out of the Farm to Fork summit, including

On the second day of the summit, Senator Charles Albertson’s S.B. 1067 passed the state senate; the bill was introduced as a result of the preliminary work done by working issue teams (WITs) before the summit. 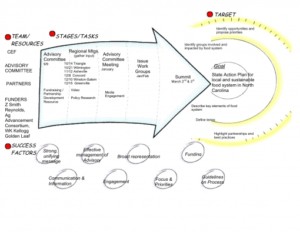 After the summit, CEFS developed a State Action Plan for Building a Sustainable Local Food Economy in North Carolina, which will be presented to decision and policy makers, business leaders, government agencies and funders in the spring of 2010. With funding from the Golden LEAF, the W.K. Kellogg Foundation and the USDA’s Sustainable Agriculture Research and Education (SARE) program, CEFS is working to develop the initiatives identified during the Farm to Fork summit.

A complete archive of the 2009 From Farm to Fork: Building a Sustainable Local Food Economy in North Carolina website can be found here.