This article originally appeared on the Community Food Strategies website.

Even though it is only 7 a.m., the conference center is buzzing with activity.  Representatives from food councils across North Carolina have called an impromptu meeting to discuss a response to federal budget cuts which threaten funding for the Supplemental Nutrition Assistance Program, or SNAP, the largest program in the domestic hunger safety net. The room is charged with a sense of urgency and purpose.

Within an hour, a plan is set in motion.  A letter is drafted to key lawmakers, arguing for the protection of SNAP funding at current levels.  Each food council representative commits to recruiting organizations in their district to sign on.  And a date is picked to hand-deliver the signed letters to both U.S. Senators from North Carolina, Richard Burr and Thom Tillis, as well as U.S. Representatives including David Rouzer (NC-07), who sits on the House Committee on Agriculture. 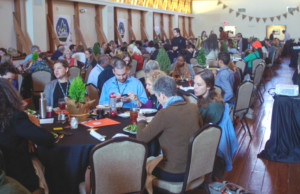 The meeting is adjourned, and the food council representatives filter out of the room to grab breakfast before the first morning session.  It is the second day of the Statewide Food Council Gathering, a conference of North Carolina’s local food policy councils in November 2017 organized by a multi-organizational partnership called Community Food Strategies.  The partnership represents expertise across six sectors – health, environment, agriculture, economy, policy and equity – and includes the Center for Environmental Farming Systems (CEFS), Carolina Farm Stewardship Association (CFSA), Care Share Health Alliance, the NC Rural Center, the Appalachian Sustainable Agriculture Project (ASAP), and the Committee for Racial Equity in the Food System (CORE).

Community Food Strategies’ logo is, fittingly, a bee; a symbol of the pollinator and hive-building roles the group’s eight members play in growing the network of local food councils in North Carolina.  Before the group started its work in 2012, North Carolina had five active food councils.  Five years later, the state ranked second nationally in number of food councils, behind only California, at 30 active councils[1].  The current number is 34 and growing.

In the end, the food councils’ letter was signed by 120 organizations from Boone to Wilmington, representing a wide range of sectors including direct emergency food providers, youth advocates, mental health services, agricultural organizations, farm businesses, farmers’ markets and many others.  The letters were hand delivered to Burr, Tillis, and Rouzer’s Washington D.C. offices on February 5.  “It was really the first time we had such cooperation among food councils.  It’s pretty powerful that we could come together and do this,” says Sam Hoeffler of the Durham Food and Farm Network (DFFN), who helped organize the campaign.

The groundwork for exactly that type of cooperation had been laid by several years of building and connecting North Carolina’s food council network.  Each food council functions independently and sets its own priorities, reflecting the community it represents.  Many of the councils’ priorities overlap, and food access and hunger issues are a common thread.  “After five years in this work, it is really exciting to see this network not only expanding, but really connecting to work on important issues together,” says Abbey Piner, Community Food Strategies’ Director.  “We know that food systems work is inherently regional, so working together across communities is an indication of the growth and increasing capacity of this food council network.” 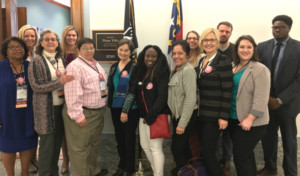 “Because the food councils have been interacting across the state through in-person gatherings and regional calls, these groups knew and trusted each other, which made it possible to work together right away on the SNAP action,” explains Jared Cates, Community Mobilizer at the Carolina Farm Stewardship Association and policy lead for the Community Food Strategies’ team.

“The key was that we had a way to connect with the other food councils,” agrees Sarah Daniels, Executive Director of Wilmington, NC-based non-profit Feast Down East and liaison to the Cape Fear Food Council.  As a new food council, they had never taken on policy issues before. “Having the Community Food Strategies team there saying ‘we can support you all in working together’ – there was lots of support to help us stretch our policy muscles,” says Daniels.

The letter-writing campaign also led to action within local government.  The Chapel Hill Town Council, Hillsborough Town Council, Carrboro Board of Aldermen, and Durham Board of County Commissioners all passed resolutions supporting protecting current levels of SNAP funding.  “To have grassroots work inform action at the town level and have [SNAP support] institutionalized in that way is really inspiring,” says Hoeffler.

The SNAP letter-writing campaign was not the first time food councils in North Carolina engaged with policy makers.  For several years, the Charlotte-Mecklenburg Food Policy Council (Char-Meck FPC) has cultivated relationships with state and federal lawmakers, becoming a trusted resource on food and hunger issues in the process.  Char-Meck FPC Executive Director Erin Brighton has a background in politics and saw an opening the council could fill.  “No one was talking about issues related to food,” she says.  “ I realized that we could drive the conversation if we got involved.”

In 2015 and 2016, Char-Meck FPC hosted candidates’ forums as a way for the public to engage with those running for public office on the topic of food.  The 2015 forum was attended by several local candidates running for school board, mayor and city council.  The informal event was attended by a larger than expected, and very engaged, audience.

The following year, Char-Meck FPC hosted a second candidates’ forum, this time with a more formal structure that included candidates fielding questions from the audience.  U.S. Representative Alma Adams (NC-12) attended, as did State Senator Jeff Jackson, who ran for (and won) a seat in North Carolina’s 37th district.

“Community Food Strategies helped us develop a plan and a roadmap for the work ahead and identify our priorities.  Those resources are so valuable when you have such a small organization.  We would have never had the confidence to do [things like the candidates forum] without them,” says Brighton.

Following the candidates’ forum, Representative Adams invited the Char-Meck FPC  to participate in the Adams Hunger Initiative, an effort to combat food insecurity and hunger in the twelfth district.

“To be seen and recognized as a leading voice on food issues really elevates the status of the council.  Char-Meck FPC has really been able to engage with decision-makers and open those relationships,” says Thomas Moore, Chair of the Cabarrus County Food and Farm Council, who also participated in the Adams Hunger Initiative.

“The Charlotte-Mecklenburg Food Policy Council is a regional leader in food policy advocacy,” said Congresswoman Adams. “I’m proud to work with them through the Adams Hunger Initiative to train Charlotteans in food system advocacy, develop next steps in advancing a food cooperative in Charlotte, and to protect SNAP in the upcoming Farm Bill.”

State Senator Jackson, who subsequently joined the NC Senate Agriculture Committee, has remained engaged as well.  “He was able to synthesize all of our most important food topics and bring that knowledge back to the General Assembly.  He realized that there’s real passion behind food issues in North Carolina,” says Brighton.

With a connected and active network of food councils in North Carolina, it’s a great time to be working towards a food system that supports healthy food access for all North Carolinians.  “As the 2018 Farm Bill process unfolds, it is exciting to know that communities across North Carolina are energized to speak to their policy makers about what makes sense in their communities.  It is inspiring to see these groups acting together to engage and educate lawmakers on what North Carolinians need for increased food security,” says Piner.