You’ve probably seen the overall reports from Reid Evans and Richard Clark concerning the stations and field labs. We have power at all locations now and are dealing with downed trees and some structural damage across stations east of Raleigh. It varies from station to station. Losses and damages to plant sciences research plots exist, but are not as large as I feared. Sweet potatoes and peanuts are the larger concern along with yield and quality losses to cotton and soybeans. 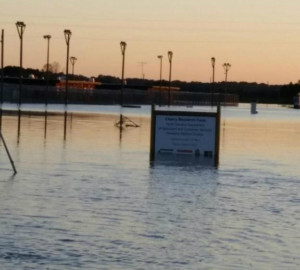 The outlier in all of this is Cherry Research Farm. Water continues to be at record high levels and access to the livestock units (swine, dairy, and beef) is limited. We do have power and water pressure at those units which is a blessing. Currently, we are ferrying people in to milk and feed by boat. Milk is being dumped. Calving season has started (5 hit the ground today), with an expected 75-80 over the next two weeks. Water is now in the shop, service building, and possibly the office.

As long as power and water pressure hold out, the major concerns are access and feed. For access, we are able to use boats now. As the water slowly recedes, the concern is water becoming too shallow boats and too deep for tractors, complicated by the unknowns of where culverts are washed out, etc. Part of tomorrow’s plan is to scout the known culverts to determine their soundness as this is a critical piece of intelligence. It should be mentioned that the aquatics weed group at NCSU and Plant Industry have been very helpful with boats. 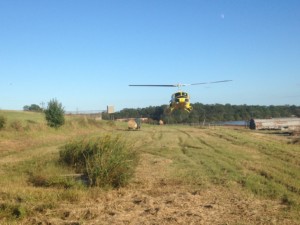 For feed, we were blessed by the presence of a helicopter from the Forest Service to airlift hay bales to the dairy. Plans are for that to take place again tomorrow. We cannot say enough about the skill and willingness of the Forest Service and their pilots. Feed will arrive from Lake Wheeler tomorrow. We don’t yet have a solution for delivering feed to the livestock units but know that will need to be done by Friday. Again, accessibility is the issue.

The stations in the western part of the state, primarily Piedmont, have been supporting the efforts at Cherry very well. Teams of 3-4 are planned to arrive through the weekend at minimum. They are sending livestock experience and will be providing lunch as well. Others have been very helpful, especially John Garner who will be making his third trip with supplies tomorrow. There are numerous others; we are blessed with an outstanding team on the research stations and field labs.

The goal is to continue to provide for the basic needs of the livestock and begin to recon the overall station for accessibility as well as identification of needs for the cleanup. Some of the plans for putting the place back together are already in motion.

Andy Meier and Johnnie Howard have been tirelessly managing the situation. The staff here at Cherry is resilient and dedicated and the assistance from other stations is evident. They have all be exceptional with support from other divisions at NCDA and departments at NC State.

Today was a good day at the Cherry Research Farm. Water levels finally dropped to the point that boat access to the livestock units was no longer possible. We were concerned for many days that when this day came washed out culverts would also make vehicle traffic not possible. However, we thankfully discovered that the major culvert on Stevens Mill Road was intact and able to handle traffic. So, we can now drive to the dairy albeit through some remaining water spilling in from the Neuse. 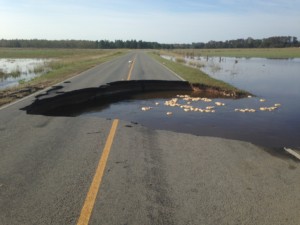 While there is a major culvert washed out near the beef unit on Stevens Mill Road, we have tractor access between all three livestock units using the dairy as the entry point. This was a major, positive discovery.

Beef, swine, and dairy cows are all fed and calving continues. A smaller staff was on hand with assistance once again from the Piedmont Research Staton. Our “command center” has now been moved from the old dairy to the shop/service building area. For the first time since this started, no one will be spending the night at the old dairy or anywhere else on Cherry for that matter. 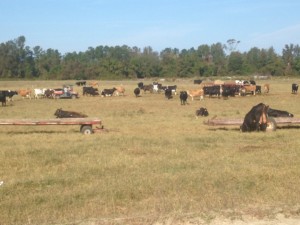 Sunday will be an animal husbandry day only. Monday will be an assessment of the infrastructure. While there is power at the shop and service building, we will give the system a thorough check before throwing the switch to turn it on. Almost all larger equipment was staged in drier areas before the storm, but there will be a lot of small engines and gear boxes, as well as some larger equipment to service before anyone turns a key. Water damage exists to some buildings and equipment, but an initial assessment appears it is not as widespread as feared. The rest of the week will depend on what is found on Monday.

Thanks again for the dedication of the Cherry staff, the other research stations, NC Forest Service, and all the others who came to assist. Many we will be back in the coming weeks.