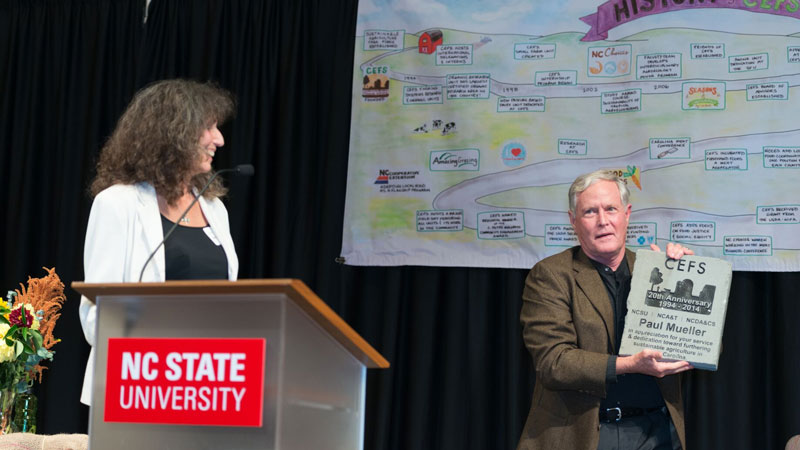 Thank you to our sponsors, our wonderful panelists and ‘CEFS Talks’ speakers, and everyone who came out to help us celebrate our 20th anniversary!

On Saturday October 18, CEFS hosted past and present interns, apprentices, staff, faculty, graduate students, longtime friends and supporters to celebrate how far we’ve come together with good food, drinks, music and more. The CEFS Reunion was held in Talley Student Center at NC State from 6 – 9 pm.

The Reunion included tributes and farewells as well as short talks about CEFS’ history and impact from founding leadership and CEFS alumni.

Paul Mueller, Professor Emeritus of Crop Science at NC State University, headed the task force that led to the founding of CEFS. Dr. Mueller was the College of Agriculture and Life Sciences’ (CALS) Sustainable Agriculture Coordinator from 1994-2009, and CEFS’ Farming Systems Research Unit Coordinator from 1998-2011. He was also CALS’ Assistant Dean for International Programs from 2007-2011. Dr. Mueller retired in 2011.

John M. O’Sullivan recently retired from NC Agricultural and Technical State University, where he had worked with the Cooperative Extension Program since 1983. Dr. O’Sullivan was involved in the formation of CEFS’ Farming Systems Research Unit and Small Farm Unit, and was the Small Farm Unit Coordinator from 2004-2014. In 2009 Dr. O’Sullivan became Co-Director of CEFS, a position he held until his retirement earlier this year.

Alex Hitt and his wife Betsy have been farming Peregrine Farm in Alamance County, NC since 1982. Long-time leaders in the local foods movement, in the early 1990’s they were involved in the planning and design of the CEFS research farm. They have served on various CEFS advisory committees over the years and currently serve on CEFS’ Board of Directors.

Roger Crickenberger was involved in the early development of CEFS as Extension State Program Leader for Agriculture and Natural Resources. Subsequently, he served as CEFS’ administrative liaison to CALS administration for funding and program support. Since 2004 he has been the Special Projects Manager for the NC Agricultural Research Service. Dr. Crickenberger continues to serve as an Administrative liaison to CEFS’ Board of Advisors.

Susan Perry-Cole is the President and CEO of the NC Association for Community Development Corporations. Previously she was an assistant secretary at the NC Commerce Department and Executive Director of Eastern Carolina Legal Services. Ms. Perry-Cole also worked in Congresswoman Shirley Chisholm’s office and with the Lawyers Committee for Civil Rights Under Law, Southern Regional Council and Essex County Legal Services. She joined CEFS’ Board of Advisors in 2013.

A note on the format: “CEFS talks” are modeled on ” TED-talks”. Each speaker will have 5 minutes to share their (brief!) story about how CEFS influenced them and how they’re impacting the world now.

Cary Rivard was a CEFS intern during the summer of 2002. He returned to NCSU in 2004 to complete his MS and PhD in Plant Pathology, working with Frank Louws and Mary Peet. While at NCSU, his research focused on the utilization of grafted tomatoes as a way to manage diseases in heirloom and hybrid tomato production systems. In 2010, Cary joined the faculty in the Department of Horticulture at Kansas State University as the Fruit and Vegetable Extension Specialist.

Suzanne O’Connell completed both her Master’s and PhD in Horticultural Science at NCSU. Research projects conducted through CEFS included organic high tunnel production of grafted tomatoes (M. Peet) and indicators of short-term nitrogen mineralization from warm-season cover crops in organic farming systems (N. Creamer). In 2013, she became an Assistant Professor at the University of Georgia with teaching and research focused on sustainable and organic horticulture practices.

Sarah Morgan completed her BS, MS, and DVM at NCSU. She participated in multiple forage projects at CEFS under Drs. Jim Green and Matt Poore. She did her Master’s thesis on estimating forage biomass for animal grazing programs, using several sites at CEFS. Immediately prior to starting vet school she was the Technical Coordinator for NC Choices. She received her DVM in 2011 and is currently working as a veterinarian in Fayetteville, NC.

Danielle Treadwell completed both her Master’s and PhD in Horticultural Science at NCSU. Both her MS and PhD projects were conducted at CEFS exploring the ecological impacts of cover crops on organic vegetable systems with Nancy Creamer. She joined the faculty at the University of Florida in 2005 and is now an Associate Professor of Horticultural Sciences with research and Extension responsibilities for organic and sustainable vegetable production.

Jennifer Curtis is Co-Founder & Co-CEO of Firsthand Foods, a Durham-based business specializing in local, pasture-raised meats. Jennifer worked as a consultant to CEFS on a variety of food systems projects, including developing its NC Choices initiative, which advances local, pasture-based meat supply chains. She is the author of numerous publications, including CEFS’ Guide From Farm to Fork: Building a Sustainable Local Food Economy in North Carolina.

Joel Gruver has been an Assistant Professor of Soil Science and Director of Organic Research at Western Illinois University since 2007. He completed his PhD in Soil Science at NCSU in 2007. He managed the CEFS Student Farm and Internship program in 2000 and 2001 and included soils from the CEFS Systems experiment and Organic Transition experiment in his PhD research.