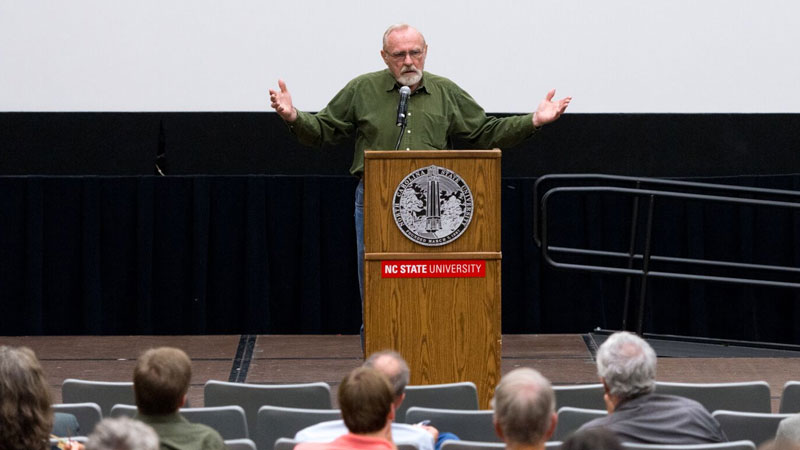 Thank you to our sponsors, attendees, and of course to Fred Kirschenmann for a wonderful and thought-provoking “Future of Food and Agriculture” lecture!

Fred Kirschenmann, Distinguished Fellow at the Leopold Center for Sustainable Agriculture and President of Stone Barns Center for Food and Agriculture, visited CEFS as part of its twentieth anniversary celebrations.

Mr. Kirschenmann delivered a lecture entitled “The Future of Food and Agriculture” at 5 pm on Saturday, October 18, 2014 at Witherspoon Theatre on NC State Campus. He was also one of the featured speakers for CEFS’ SOILbration at its Goldsboro research farm on October 17.

Watch “The Future of Food and Agriculture” lecture

A longtime national and international leader in sustainable agriculture, Mr. Kirschenmann is a professor in the Iowa State University Department of Religion and Philosophy and holds a doctorate in philosophy from the University of Chicago. He has held numerous appointments, including the USDA’s National Organic Standards Board and the National Commission on Industrial Farm Animal Production operated by the Johns Hopkins School of Public Health and funded by Pew Charitable Trusts. He also continues to manage his family’s 1,800-acre certified organic farm in south central North Dakota.

In April 2010, the University Press of Kentucky published a book of Kirschenmann’s essays, Cultivating an Ecological Conscience: Essays from a Farmer Philosopher, that trace the evolution of his ecological and farming philosophy over the past 30 years.

He converted his family’s farm in North Dakota to a certified organic operation in 1976. He developed a diverse crop rotation that has enabled him to farm productively without synthetic inputs (fertilizers or pesticides) while simultaneously improving the health of the soil.

Kirschenmann’s farm has been featured in numerous publications including National Geographic, Business Week, Audubon, the LA Times and Gourmet magazine. In 1995 it was profiled in an award-winning video, My Father’s Garden by Miranda Smith Productions, and is still widely used as a teaching tool. Kirschenmann also has been advisor for several documentaries including American Meat and Symphony of the Soil.

Kirschenmann served as the Leopold Center’s second director from July 2000 to November 2005 and has been recognized widely for his work. He was one of the first 10 recipients of the James F. Beard Foundation Leadership awards in 2011 and received the 2012 Sustainable Agriculture Achievement Award from Practical Farmers of Iowa.