George Teague’s Reedy Fork Organic Farm sits on 500 acres of rolling pastures and woodlands outside of Elon, in Guilford County. George is the fifth generation of his family to work this land, which was in tobacco production until his father decided to turn it into a dairy in the 1950’s. The dairy supported the family for several decades, until changes in agriculture brought hard times. Confronting escalating input costs and declining milk prices, the Teague family faced an uncertain future. Explains George, “I looked into every different thing to keep this farm going. The advice [to dairy producers] at the time was ‘get bigger or get out.’ I wasn’t interested in milking five to six hundred cows, and we didn’t want to develop [the land]. Organic was the best fit for us.”

It was on a Farm Tour organized by CEFS’ Pasture-Based Dairy Unit Coordinator Dr. Steve Washburn that George decided to go organic. “We were on a Dairy Farm Tour up to Pennsylvania and Maryland, and we visited five organic dairy farms. Four of the five farms had their kids coming back to farm or already back. That was a sign of the future: people can tell you anything, but if their kids are working on the farm [you know it’s profitable]. That tour changed everything, it really did. I came back gung-ho ready to go organic.” 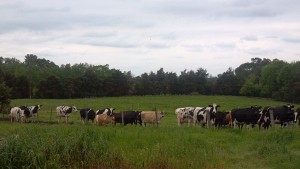 Once the farm was certified organic in 2007, the family realized that to make their system work economically, they needed to mill their own organic grains. Armed with various loans and grants, they built an organic grain mill right across the road from the house that George’s great-great-grandfather had built. Now they sell 100 tons a month of mostly North Carolina-grown milled grains to local dairy farmers, backyard and small-scale farmers – even pet stores – across North Carolina and as far away as Georgia, Alabama, and Florida. “We’ve benefitted from CEFS’ Organic Grains work as well,” explains George. Dr. Chris Reberg-Horton, CEFS Assistant Director of Collaborative Research, directs the NC State Organic Grain Project, which works with farmers to increase organic grain production throughout the state. Increased supplies of North Carolina-grown organic grain means that George imports less and less grain from other states.

“CEFS is the only place doing this kind of work. There’s not anybody else in our climate and region doing research for us.”
– George Teague, Reedy Fork Organic Farm

George has also been involved in various research projects at CEFS’ Pasture-Based Dairy Unit. Reedy Fork Organic Farm is helping to pilot test the “CowVac,” a vacuum-powered walk-through fly-trap that removes harmful horn flies from cattle as they pass through. They’ve had it for two seasons, and George says it’s “working well.” Developed at the Dairy Unit, the CowVac is now marketed commercially and is also used by conventional dairy producers to reduce pesticide use on their farms. The Teagues will also be involved in testing a portable irrigation system that the Dairy Unit is developing to help cool cows on pasture. “CEFS is the only place doing this kind of work. There’s not anybody else in our climate and region doing research for us.” 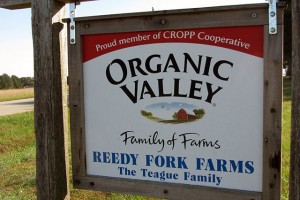 These days, George manages a herd of 100 cows, which spend their days grazing on intensively-managed pasture. George says he learned a lot about managing the pastures from CEFS’ workshops and pasture walks. “It was a huge learning curve,” he admits. Despite the big learning curve, there is no doubt in George’s mind that the changes have been for the better. While in the past George says that he practically chased the younger generations of his family away from the farm, his farm now employs five people in addition to George and his wife, including George’s son and nephew. And if George has his way, his family will continue at Reedy Fork for generations to come. It is a legacy he has fought hard to preserve.