CEFS is excited to welcome Marisa Benzle, former Small Farm Unit Apprentice, back to CEFS as the Small Farm Unit Manager.  Here, Marisa tells us about what has inspired her sustainable agriculture journey, from Ohio to CEFS to The Gambia, West Africa, and back. 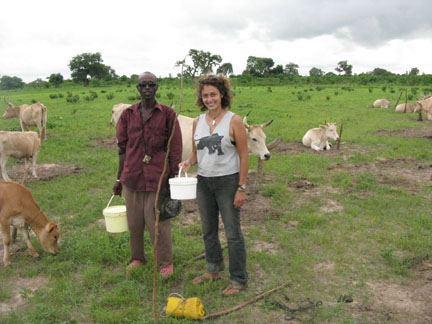 Marisa did her Peace Corps service in The Gambia, West Africa.

I grew up in a small rural town in central Ohio surrounded by thousands of acres of soy, corn, and wheat fields. My parents were ceramicists and always had a strong work ethic and a dedication to living a lifestyle in which the materials that sustained us, food, tools, clothes, came from a reliable source we had a connection to.

While we did keep an orchard, raise chickens, and tend to a large vegetable garden, we were never farmers and although I spent countless summer hours playing in the fields that surrounded our home, I understood little of their practicality.

It was not until I was in high school and the fields slowly started to disappear and be replaced by five story tacky condominiums, and many of the old farming families I grew up with were forced out of the country and into the suburbs, that I first became driven into sustainability work.

By the time I came to CEFS as an apprentice I was committed to not only making a career out of working in agriculture, but also extending the messages of sustainability to others.  I learned more in that season at CEFS than I have at any other time in my life, not just from the university researchers and NCDA technicians but from the inspiring community members, farmers, and growers of Eastern North Carolina.

I joined the US Peace Corps in The Gambia, West Africa after my time at CEFS in hopes of learning more about how the nature of our global food system was affecting the world abroad. I also was fascinated by the idea that there were still those in this world whose main goal in agriculture was simply to sustain themselves.  My hope was that some of the practices I had learned in my work in the States would be transferable. 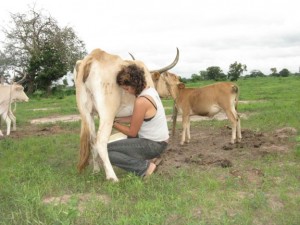 I spent much of my time in The Gambia in a small rural community of seven hundred people.  I worked with gardeners fighting off red spider mites and pulling nut sedge, teaming with cattle men and goat herders to prevent disease and parasites in their herds and flocks. I studied traditional grass hive beekeeping and toiled in the rice fields with large groups of some of the strongest women I have ever met.  All the while learning the Mandinka language so my ideas could be shared and my knowledge of the world built upon.   As with much of my experience in North Carolina, I learned as much from the people I worked with there as I taught them.

As a young woman I watched the farms I had grown up around fail to sustain the families who worked them and eventually go under.  In The Gambia I saw boys forced to leave the dignity of their family farms in search of jobs making cement block for four dollars a day.  My dream for the small farm is for it to be a tool for the farmers of eastern North Carolina so they can be true to their agricultural heritage and develop a sustainable future.