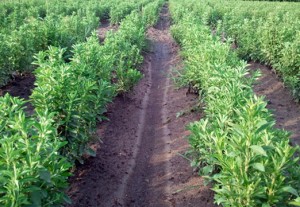 The research trial is intended to evaluate the feasibility of commercial stevia production in eastern North Carolina. The project, funded by the NC Tobacco Trust Fund Commission and Sweet Green Fields, Inc. (a commercial Stevia producer), has research trials planted in multiple locations in the state to help determine optimum fertility, pest management, and harvesting practices for the area.

“We’re excited about participating in this Stevia research trial, as Stevia has the potential to be a lucrative commercial crop for the farmers of eastern North Carolina”, says Chris Reberg-Horton, Coordinator of CEFS’ Organic Research Unit.

Stevia production has many things in common with tobacco production. Seedlings are started from seed or cuttings, grown in greenhouse float beds, and transplanted much like tobacco. The crop is harvested once or twice a year by cutting the plants, which are then dried in conventional tobacco box barns. It is a crop well-suited to the climate in eastern North Carolina and could be grown in both organic and conventional production systems.

Unlike tobacco, stevia is a perennial crop; one planting is productive for three or more years. The oldest plantings in North Carolina are 3 years old, and are still very productive, so the potential productivity of a single planting is not yet known. To date, there have been few disease or pest problems noted in the state, although two stem rot diseases well-known to growers in NC have been observed on stevia plantings. Tests are being conducted on how to manage the diseases caused by the fungal pathogens Sclerotium rolfsii and Sclerotinia sclerotiorum.

“Even though the weather this season has been a bit challenging in some areas, we are extremely pleased with the performance of our 2013 crops and we are very excited about further expanding in 2014,” commented Hal Teegarden, Vice President of Agricultural Operations for Sweet Green Fields. “We’ve learned a lot this season through the work at CEFS, and as a result of the expertise and enthusiasm of the NCSU and NCDA teams. We truly appreciate the support that is being provided and the grower interest we have received, all of which aligns with our plan to significantly bolster our supply of American-grown stevia with stevia grown in North Carolina.”

For more information about the project Stevia Production in NC, please contact Molly Hamilton: 828-628-2675 or molly_hamilton@ncsu.edu.

From the September 2013 E-Newsletter