CEFS’ Farming Systems Research Unit (FSRU) is one of seven research units at CEFS’ 2000-acre research facility in Goldsboro, NC.  Situated on approximately 81 hectares (200+ acres) of pastures, woodlands, and permanent agricultural land, the unit houses a long-term, large-scale interdisciplinary study of five different systems: 1) Best Management Practices (BMP) in a Conventional Cash Cropping System; 2) an Integrated Crop-Animal System (ICA); 3) an Organic Cropping System; 4) a Plantation Forestry System; and 5) a Successional Ecosystem.  The unit was designed to allow the nesting of short-term experiments within the context of the overall, long-term study.

Two such short-term experiments are currently being conducted at the FSRU.  One is entitled Assessing The Greenhouse Gas Mitigation Potential Of Organic Systems In The Southeast.  The long-term goal of the project is to understand the impact that organic systems in the Southeastern US can have on greenhouse gas emissions, and to educate stakeholders and students about how to maximize the mitigation potential of such systems.

Research is being carried out in the FSRU to compare the long-term effects of different practices (ie organic clean-till, organic reduced-till, organic long rotation, conventional clean-till, conventional no-till, and conventional long rotation) across the unit’s systems.  Greenhouse gases (including methane, carbon dioxide, and nitrous oxide) are produced in the soil and, depending on how that soil is managed, eventually released into the atmosphere.  In fact, the United Nations Food and Agriculture Organization (FAO) estimates that agriculture contributes 14% of global greenhouse gas emissions. 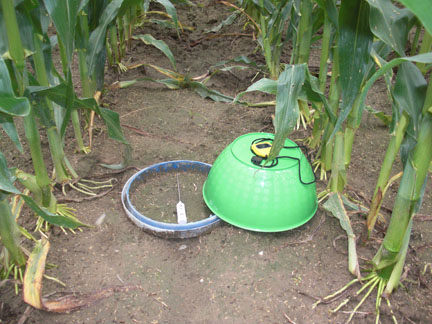 To measure the FSRU soil’s greenhouse gas emissions, CEFS researchers partially buried 32 gas-collection chambers in 18 different plots across the unit.  After each rain event, four samples are taken from the chambers at 10-minute intervals to measure the greenhouse gas levels.  The gas samples are analyzed using GC (gas chromatography).  Results are then compared across the systems to see which land management practices lead to higher levels of greenhouse gas emissions, and which practices lead to lower levels.

The other project, entitled Reduced Tillage in Organic Systems: A Soil and Water Quality Imperative, is monitoring water drainage and drainage nutrient content across the unit’s systems to study the influence that soil conditions, cropping practices and crop characteristics have on water drainage and drainage nutrient content.   As part of the normal water cycle, rainwater filters through the soil, accumulates in the water table, and may reach groundwater sources.  Unfortunately, water polluted by human activities, including agriculture, follows the same cycle and can contaminate groundwater supplies.  The study aims to identify agricultural practices that result in safe concentrations of nutrients in drainage water. 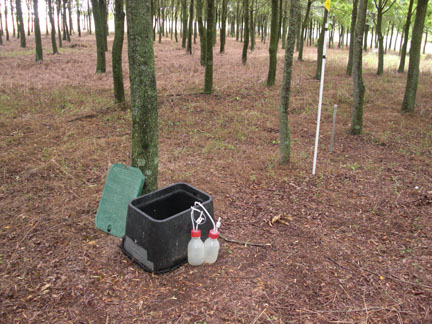 Pore water samplers and a piezometer in the FSRU’s Forestry System.

In February 2012, equipment was installed to monitor soil water content and drainage water quantity and quality across the unit’s systems.  Suction cups for pore water sampling were installed approximately 2 and 4 feet below the ground’s surface.  Additionally, piezometers are used to measure the depth to the water table and its water quality.  Soil water content is measured within the upper 4 feet of soil bi-weekly throughout the year with the neutron scattering technique, and installed gauges are used to measure evapotranspiration.  Drainage is estimated using rainfall data collected by a nearby weather station, the soil water content data, and the evapotranspiration data.

Drainage samples are collected once a month to determine nitrate and phosphate concentrations.  (Nitrate levels in groundwater are the primary concern in terms of water quality for drinking purposes.)  The US Environmental Protection Agency (EPA) considers a nitrate concentration level of 10 ppm or greater in water as unsafe for drinking. Nitrates in groundwater may originate from the surface application of fertilizers. Nitrates easily leach below the crop root zone, and especially in the sandy soils of the coastal plains.

The data collected thus far shows concentrations of nitrates greater than 10 ppm immediately after a few significant rainfall events and the surface application of fertilizers in conventionally-cultivated wheat plots.  Some residual nitrate from the fertilization of summer crops have been found and at times levels have slightly exceeded or approximated 10 ppm.  However, the data also shows that this residual nitrogen can be sequestered by the growing of a rye winter cover crop and result in insignificant levels of nitrates in drainage water.