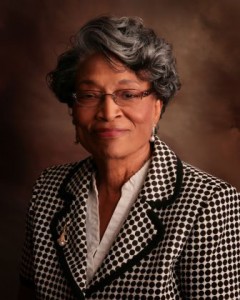 Eva Clayton made history in November 1992 when she became the first woman elected to Congress from the State of North Carolina, and the first African American since 1901.

Congresswoman Clayton represented the First Congressional District in North Carolina from 1992 to 2003. She served in various positions of leadership including: President of her Freshman Class (1993-94); Chair of the Congressional Black Caucus Foundation; and the Co-Chair of the Rural Caucus. She was the Ranking Member of the House Agriculture Department Operations, Oversight, Nutrition and Forestry Sub-Committee.

Clayton was recognized by several agricultural organizations for her leadership on agricultural issues and was known as a fighter for smaller farmers and rural communities.

Clayton retired from Congress in 2003 and accepted a three-year assignment with Food Agriculture Organization (FAO) of the United Nations in Rome, Italy. As the Assistant Director General and Special Advisor to the Director General, she encouraged, facilitated and nurtured the establishment of 24 National Alliances (Partnerships) in various countries around the world to work together to reduce hunger, malnutrition and poverty.

Clayton remains active with agriculture, rural development, and food security. She recently wrote an op-ed for the New York Times on Local Food for the Military.

A member of CEFS’ Board of Advisors since 2010, Clayton says, “Serving on CEFS’ Board affords me an opportunity to be engaged with and to be aware of small farmers’ opportunities and challenges in North Carolina. It also allows me to interact with and learn from state leaders in agriculture, business, community and the universities who care deeply about small farmers and a financially strong, environmentally healthy agricultural sector in North Carolina.”

Clayton is married to Attorney Theaoseus Clayton Sr. of Warren County, North Carolina and they have four adult children and six grandchildren. They are active in their community and are members of Cotton Memorial Presbyterian Church.

From the December 2014 E-Newsletter