Mr. Michael Tiemann, Vice President of Open Source Affairs at Red Hat, is a founding member of the CEFS Board of Advisors. 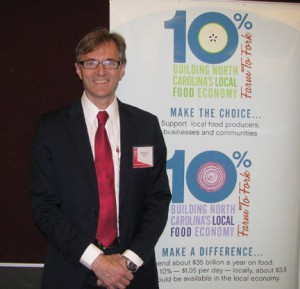 Mr. Tiemann founded the world’s first open source software company in 1989, which means that for the past 24 years he has been trying to explain how one can make money by allowing anyone — including competitors — to freely copy software source code. His own company’s revenues and profits provided some explanation, but even in 2006, six years after his company was acquired by the world’s open source leader, Red Hat, Mr. Tiemann could not answer to his own satisfaction whether the open source business model was truly sustainable. After reading The Omnivore’s Dilemma by Michael Pollan, Mr. Tiemann realized that the 60-year history of software was insufficient to answer to his questions about long-term sustainability, whereas the 6,000-year history of agriculture just might.

Mr. Tiemann explains, “I was so excited to learn of a comprehensive framework for understanding multi-generational sustainability that I immediately went to find who might be the leading experts in this field. After talking with CEFS Co-Director Nancy Creamer about my interests and the intellectual cross-pollination opportunities between sustainable agriculture and open source software, I happily agreed to join the CEFS Board of Advisors.”

Mr. Tiemann is also a Trustee of the UNC School of the Arts, a member of the Board of Visitors of Carolina Performing Arts, and President of Manifold Recording, a high-end, carbon-neutral recording studio in Pittsboro, North Carolina. He is also the co-owner of Miraverse Power & Light, a partner in one of the first solar/agricultural double-cropping systems in the country.

Mr. Tiemann earned his Bachelor of Science in Computer Science Engineering from the Moore School of the University of Pennsylvania in 1987.

From the Februrary 2013 E-Newsletter