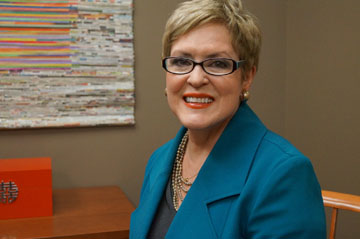 Cheryl Queen, Chair of the CEFS Board of Advisors, leads communication and corporate affairs for Compass Group USA, the leading contract food and support services company with annual revenue of $12 billion. Within that role she has also shaped the company’s corporate responsibility initiatives including support of family farms and local economies, fair food and human rights, and farm animal welfare.

Cheryl was recognized by the American Association for Affirmative Action with the 2010 Cesar Estrada Chavez Award for her effort in crafting a Code of Conduct for Suppliers and an agreement to pay tomato harvesters in Florida a penny more a pound, resulting in a 64% increase in pay for harvesters picking tomatoes for Compass. The partnership between the Coalition of Immokalee Workers and Compass Group has been heralded by Secretary of Labor Hilda Solis and noted food industry critic Eric Schlosser, among others, as history making for farm workers. She serves on the Board of Directors of the Fair Food Standards Council for the Coalition.

She has been a featured speaker at the Robert F. Kennedy Center for Justice and Human Rights’ Compass Conference, the COMMIT Forum, and the UL Conference on Responsible Supply Chains, and Leadership North Carolina. She is co-chair of the Steering Committee of the Farm Foundation’s Dialogue on Food & Agriculture in the 21st Century.

Says Cheryl, “We are incredibly fortunate in North Carolina to be on the leading edge of the sustainable food movement.  It’s not just happenstance but reflects the hard work, vision and dedication of NCSU, the staff and faculty from NC State and NCA&T and the remarkable leadership of Dr. Nancy Creamer and Dr. John O’Sullivan. It’s a vision crafted almost twenty years ago that has come to fruition.”

A native of Atlanta, Cheryl graduated from Oglethorpe University and did post-graduate work at the University of Georgia. She is married, resides in Charlotte, and is the mother of two grown children.