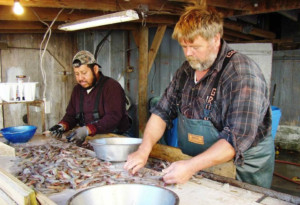 January 2017 — This past holiday season, shoppers were in for a special treat when they found frozen North Carolina shrimp at area Weaver Street Market (WSM) stores, just in time for end-of-year celebrations.  The shrimp – the result of a local supply chain collaboration between Weaver Street Market, Mr. Big Seafood, and Seal the Seasons – features NC Catch’s new label designating it as locally-caught product.

NC Growing Together supported the development of the NC Catch freezer labels and two NC Catch “retail market guides” – brochures that help consumers find fresh North Carolina seafood markets across the state.  The brochures have been particularly popular in coastal visitors’ centers and at the NC State Fair.

“We didn’t start out as a branding organization,” says NC Catch’s Executive Director Ann Simpson. The non-profit, which was founded in 2011 mainly to promote consumer education about the benefits of buying North Carolina’s locally caught seafood, has dramatically increased its branding efforts for North Carolina-caught fish and seafood with NCGT support.  “NCGT’s support has been invaluable to NC Catch.  We would have been much slower to look at the marketing and branding piece without NCGT’s help.” 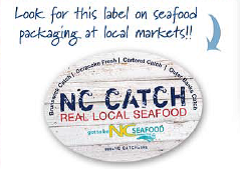 Branding a product as North Carolina-caught is especially important, Simpson says, given the amount of seafood that is imported but not labelled as such.  “Consumers don’t always know when seafood is imported, especially if it is frozen,” she says.  “With this label people can easily identify local product, and that’s important to many consumers.”

NCGT also funded a 2016 Summer Local Food Supply Chain Apprentice, Gigi Lytton, who worked with Simpson at NC Catch and with John Aydlett, Seafood/Aquaculture Marketing Specialist at the North Carolina Department of Agriculture and Consumer Services (NCDA&CS), to update NCDA&CS’s Seafood Directory.  NCGT will be funding a 2017 Summer Apprentice at NC Catch who will work on further developing NC Catch’s marketing efforts, including developing profiles of fishermen and others in the local seafood supply chain for their website and other communication tools.

For the holiday shrimp sale, Mr. Big Seafood of Harkers Island sold over 4,000 pounds of locally-caught fresh shrimp to the local cooperative grocery chain Weaver Street Market, which partnered with Hillsborough, NC-based processor Seal the Seasons to have it frozen using their “IQF” (Individual Quick Freezing) equipment.  IQF freezes each individual shrimp, rather than creating a solid frozen block, so that consumers can easily portion off how much to thaw and cook. 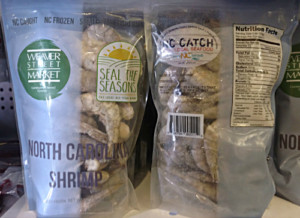 “This example of collaboration illustrates some of the key elements that make a local food supply chain work,” says NCGT Project Manager and food systems researcher Dr. Rebecca Dunning.  “The NC Catch label signifies to consumers that the product truly originates from NC fishermen, thus differentiating it from competitors.  The availability of scale-appropriate infrastructure, in this case the IQF equipment housed at the Piedmont Food and Agriculture Processing Center in Hillsborough, made it feasible to transform a highly perishable fresh product into a freezer-stable and consumer-ready product.”

“Consumers definitely want local seafood,” confirms Carolyn Twesten, Produce and Meat Merchandiser for Weaver Street Market.  “They really want fresh seafood, and local is the freshest.”  According to Twesten, Weaver Street Market had doubled fresh and IQF local shrimp sales in 2016 over 2015 – even before the year-end deal – and hopes to double sales again in 2017.

“Local seafood is a wonderful, healthy resource from the coast that provides a great business opportunity for folks,” says Alison Willis of Mr. Big Seafood.  “The importance of the NC Catch label is huge.  We as fishermen and wholesalers can label North Carolina products and consumers can learn about where their seafood comes from, the story behind who caught it.”  Ann Simpson of NC Catch sums it up when she says, “We love it when we can find partners like NCGT and put our expertise, funding, and energy together towards projects that really meet both our goals.”

NCGT is one of this year’s sponsors of the 6th Annual NC Catch Summit, March 13 & 14 in Nags Head, NC.  The conference is geared towards making supply chain connections between fishermen and other seafood suppliers, chefs, restaurants, and other buyers.  Registration is now open – visit NC Catch’s website for more information.

This article originally appeared in the January 2017 NC Growing Together Newsletter.