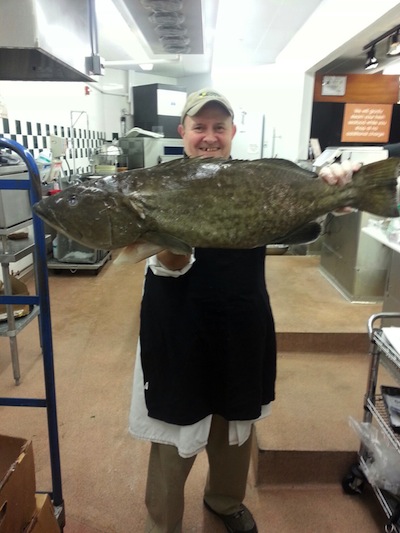 August 2013 – Terry Harrison is the Director for Bakery and Seafood for Lowes Foods, and he wants to get more local fish and seafood into the chain’s 100+ North Carolina stores. This past February, at the suggestion of John Day, NCGT Team Lead for Seafood Supply Chain development, Terry attended the NC Local Catch Summit at the University of North Carolina Coastal Studies Institute in Wanchese. The Summit was organized by North Carolina Catch, a non-profit umbrella organization that connects the marketing and consumer education efforts of the four regional NC Catch groups in Carteret, Ocracoke, Brunswick, and the Outer Banks.

The Summit attracted a capacity crowd of fishermen, retailers, restaurant-owners and food advocates with its theme, “Bringing Seafood into the Local Food Movement”. “The Summit was a key piece of building up connections,” says Karen Willis Amspacher of the Core Sound Waterfowl Museum and Heritage Center, who is on the Executive Committee of NC Catch.

“This was the first gathering where seafood was incorporated into the local food movement,” Karen explains, “And

[the theme] was very well-received. The fishermen understood that there are very real parallels between the fishing and the farming communities”. Terry was amazed to see the depth and breadth of activity in local seafood. “It was one of the most productive meetings I’ve been to in my 13 years at Lowes”, he says.

Inspired by the connections he made at the Summit, in early June Terry organized a sale of 700 pounds of fresh local black grouper into four Lowes stores – Pinehurst, Sanford, Winston-Salem, and Clemmons. The customer response was outstanding: the 700 pounds sold out in just three days. “The grouper event really opened our eyes to the potential of doing other local and seasonal sales events,” says Chris Van Parys, Vice President for Sales & Merchandising at Lowes Foods. “We’re currently considering other possibilities such as a high-value, heritage breed pork chop.”

There are issues to be worked out, but Terry says they are “all areas of opportunity, not problems”. One such issue is developing cold chain storage capacity, meaning the ability to store and transport fresh – and highly perishable – products through the supply chain at refrigerated and freezing temperatures. There are limited distribution options in the state for small fish houses and independent fishermen.

But Terry is undaunted by the challenges. He is also working to increase in-store capacity for filleting whole fish; previously all fish had to arrive at the store already filleted. Changing this requirement opens up a whole new world of possibilities for buying from local sources, as most fishermen and fish houses are not set up to do filleting in-house . “Lowes is committed to making the changes and adjustments necessary to allow more North Carolina fish and seafood to enter our supply chain in order to provide our customers with healthy, fresh, high-quality products from the coast”, he says.

Terry feels strongly about bringing more local seafood into Lowes. He notes that Lowes has already committed to purchasing 100% Carolina shrimp for all its stores, representing $3 million in yearly purchases from local suppliers. “We’re the only company in North Carolina that’s doing that,” he says proudly. But he also wants other retailers to get on board: “The more of us [supermarkets] that buy local, the better we’ll be as an industry”.