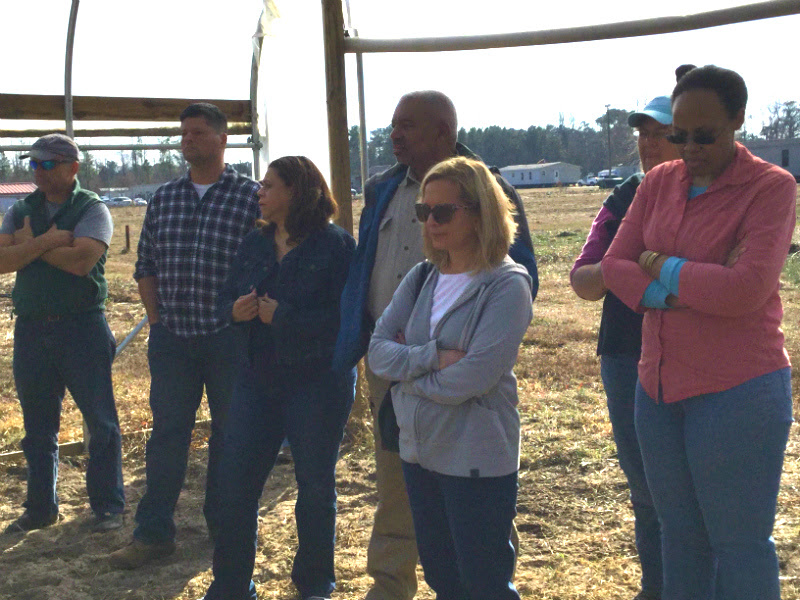 February 2017 — Last April, NC Growing Together reported on Farm-to-Base and Base-to-Farm Efforts at Camp Lejeune in Jacksonville, NC. NCGT matched funds with Onslow County Cooperative Extension and the Onslow County Farmers Market Association to hire a full time Farmers Market and Incubator Farm Manager, Marie Bowman. This year, Marie and the incubator farm are getting a head start on the season. The farm hosted the first NCGT Season Extension workshop of 2017 — which also served as the kick-off for the newly revitalized incubator farm’s first full season — on February 8th.

This year’s farmer co-hort is ready: 16 people have signed up, including 4 active duty military personnel and 2 recently-retired military personnel. Many signed up as couples with their spouses. Participants will attend weekly classes and work together on tending crops in a large common plot as well as in high tunnels. NC Cooperative Extension agents and specialists will provide much of the production expertise, and the farm will take advantage of business resources available at Sampson Community College’s Small Business Center.

“We’re starting with the basics,” says Bowman, “Soil science, soil testing, and soil fertility. We’re trying to give participants a whole-farm concept – thinking about your market first before planting and focusing on profitability.”

In the second year, participants will transition to their own individual plots as well as learn about more advanced farming topics including organic production and Good Agricultural Practices. “Taking a communal approach in the first year takes the pressure off individual participants and allows everyone to work through a growing season together and really focus on learning,” explains Bowman. 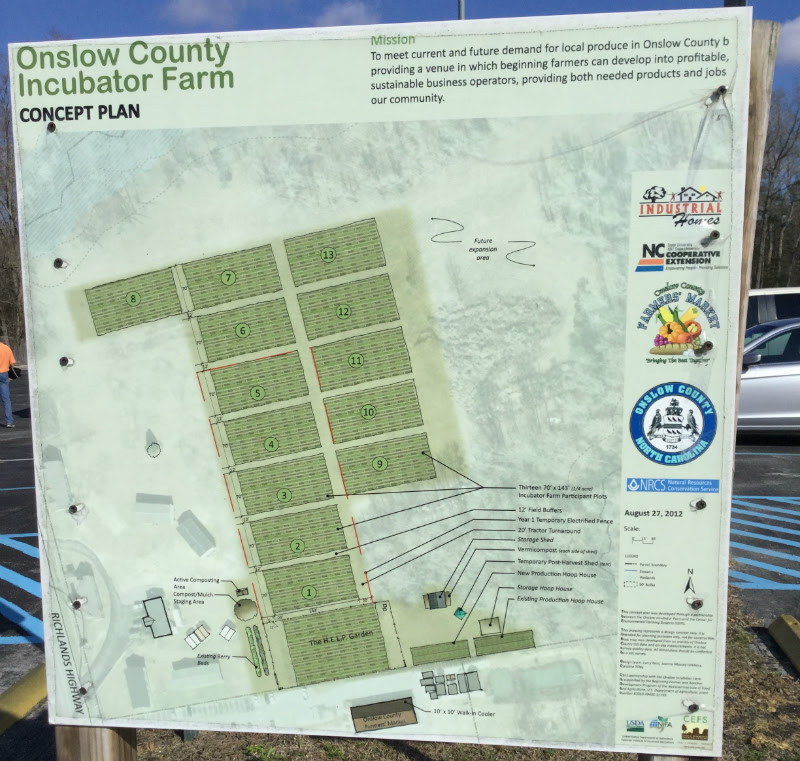 Tim McCurry, Community Plans and Liaison Officer for Camp Lejeune, is trying to line up opportunities for the incubator farm’s produce to be consumed on-base. McCurry is working with base personnel and Barry Lee, district manager for Sodexo, the base’s food service provider, to have the farm’s produce featured in one of the base’s semi-annual “Chef Competitions”. “While the overarching goal is sustainability, there is a community appeal of bringing produce grown by current and former service members on-base to be prepared by and served to current service members in the Chef Competition,” says McCurry. “We support local agriculture as part of the military base’s efforts against encroachment, and we always try to promote sustainability – it makes good business sense,” adds Lee.

In addition to supporting the Farmers Market and Incubator Farm Manager position, NCGT funded a Summer 2016 Local Food Supply Chain Apprentice, Taylor Halso, to support the incubator farm and farmers market efforts, and will do the same in Summer 2017.

This article originally appeared in the February 2017 NC Growing Together Newsletter.