Back to career ladder profiles

“CEFS has had a huge impact on my career path.  Honestly, one of the reasons I took this position [at NC State] was so that I could continue working with CEFS.” 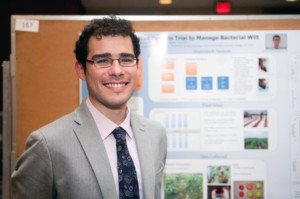 “The Apprenticeship is ultimately what led me to apply to the Master’s Program in Horticultural Science [at NC State University],” he says. After investigating nitrogen use efficiency in grafted watermelon and tomatoes for his Master’s degree, David worked on increasing resiliency in grafted tomato through rootstock selection for his Ph.D, which he completed in the spring of 2018.

Along the way, he conducted numerous extension workshops at CEFS’ Field Research, Education, and Outreach Facility at Cherry Research Farm in Goldsboro, and became a CEFS NC State Graduate Fellow. “The graduate fellowship allowed me to network well outside of my discipline while at the same time promoting CEFS’ programs to a diverse crowd,” he says.

This year, David’s journey came full-circle when he was hired as an Extension Assistant Professor in Organic Production Systems in the Department of Crop and Soil Sciences at NC State University. Once a student in these halls, he’s now a professor, passing his knowledge and passion on to the next generation.