Back to career ladder profiles

“FYI was really helpful in building my professional development. I’ve learned how to advocate and how to define justice. Everything I’ve learned carries through the work I’m doing with Bonner [Scholars] and my Major.” 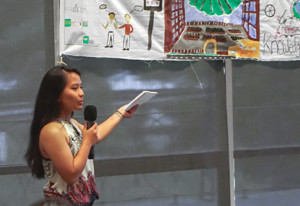 When Ree Ree Wei started attending CEFS’ Food Youth Initiative (FYI) meetings as a freshman in high school, it was just her and her sister representing Transplanting Traditions Community Farm.  “We talked about what we wanted to do, and we recruited more people.”  Five years later, the Transplanting Traditions youth group is six-members strong, and a core member of the FYI network of youth groups around the state that are connected in their passion and activism to change the food system.

Ree Ree has stayed active in FYI, attending annual summer gatherings, and this past year was an FYI Summer Intern. “What I really like about FYI is that it’s youth-focused. The summer internship allowed me to take charge of what I wanted to do, which was to learn about how we can use our stories to advocate for our communities.“

Ree Ree and her family, who are from Burma, arrived in the U.S. from Tham Hin Refugee Camp in Thailand when she was eight years old. “I want to use my voice to share my story, and others’ stories, and bring attention to refugees. Ultimately I want to be an immigration attorney and work with refugees,” she says. Now a sophomore and Bonner Scholar at Guilford College in Greensboro, she is majoring in Community and Justice Studies.

She’s also gained a network of co-horts who she says she’s “bonded” to. When helping to organize Guilford College’s FoodStorm Conference this spring – which focuses on people-of-color farmers and youth, she was asked to help recruit youth. “I knew exactly where to go – I invited all the FYI youth,” she says.